Reflections on a Citizen’s Walk

Last Wednesday, leaving my office, I joined my neighbor Mindy Pollak, Borough Councilor from the highly multicultural District Claude-Ryan of Outremont, and Philip Tomlinson, political staffer at Projet Montréal who was defeated last year in the one next door. I was responding to their invitation for a citizen’s walk in the neighborhood and I came out with the impression that things are moving in the right direction, in Outremont. At least, it is still possible to get involved in politics around here in a constructive, unifying and positive way.

For nearly two hours at dusk our small group walked through the streets and alleys of the neighborhood, stopping here and there to talk spontaneously of the past, the present and the future. In the meantime we looked at several municipal projects, both large and small — from the Fleurir De l’Épée project to the Laurier Street redevelopment project. 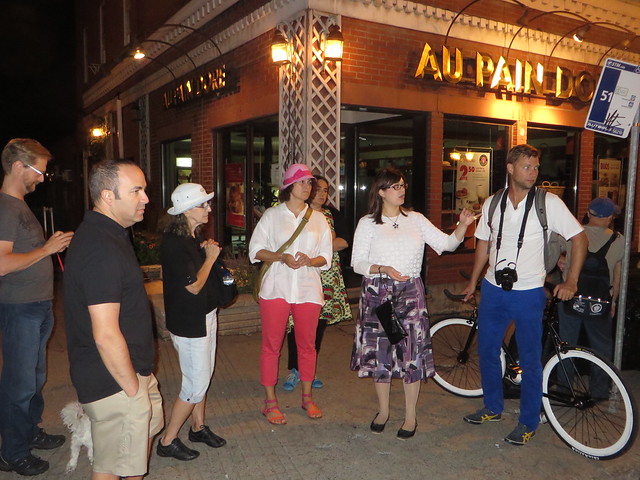 Along the way, I realized once again that Mindy Pollak maintains warm and friendly relationships with citizens of various ethnic groups and religions, contrary to what some may suggest in ostracizing (as if this was a fatal weakness!) the fact that she is an Hasidic Jew. Instead, the young councilor focuses on many issues besides those directly concerning her community which is very active in the neighborhood. Her French is excellent. She shows a strong desire to serve the common good and to maintain harmonious relationships with any citizen of good will. I would personally be delighted if all actors of the local political scene decided to show the same pragmatism, openness and simplicity.

More broadly, I believe that reconciliation between citizens and municipal politics is not just about open data — as desirable as it is, and public webcasts of the Borough Council. It should still and always rely on educative, respectful and direct interactions between the people and their representatives. This is important for the prosperity of political parties, of course — I am not naive and I know that partisanship was not absent from this walk. But it is also important to restore citizen’s enthousiasm for actively participating to the life of *their* city.